Seishinkan Iaido and Jodo Dojo
Seishinkan Dojo History
In September 1978 while Chris Mansfield was living in London, he started Iaido under Sensei Len Bean (2nd Dan Iaido) of the Hagakure Dojo which at that time was the only dojo practicing Iaido actively in the U. K. Numbers of members were small and the only Iai known were the forms called Seitei Iaido. Competitions or grading were unheard of but, once in a while the club was asked to do demonstrations for the public.
In the spring of 1980 Chris Mansfield went on a three week holiday to Japan to practice at Kawasaki dojo.
Upon his return to London, Chris decided that he would like to start his own dojo where he could practice for himself. He had felt at that time the impact of learning Iai from a Japanese teacher was a profound influence and needed to be consolidated. He continued practicing at the London Nautical School under Bean Sensei and in April 1981 he found a local scout hall which was adequate and started sessions.
After a short while other Budo people came along and asked to join the classes and so the club was started. In those days it was called Ealing Iaido Dojo.
The following year when he returned to Japan, the name SEISHINKAN was chosen for the Ealing dojo as most appropriate. It means correct mind dojo or good heart dojo.
Since that time various members have come and gone, but the dojo has remained resilient throughout its 32 year history, even when Chris Mansfield went to live in Japan for 11 years from 1996 - 2007.
Seishinkan has proudly lived up to its name and produced many members who have represented their dojo and country nationally and internationally respectively. Those people continue to help the Budo community in various roles to promote Budo as a lifelong philosophy.
Today apart from the Honbu (main) dojo in Ealing there is a sub dojo in the Tooting, London. Whilst still small it is good to know that the quality of people practicing is still high. 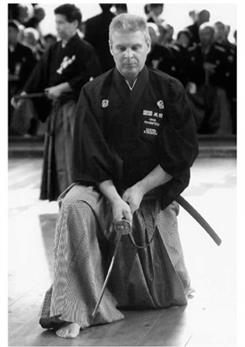